Following World War I, the United States and her allies agreed to adopt a Victory Medal substantially the same in design, but with certain variations for each nation. The Winged Victory of Samothrace, basis for obverse design, received different treatment, therefore, at the hands of the several countries' artists. Reverse inscription, The Great War for Civilization, was common to all.

Inter-Allied Commission on the Victory Medal assigned the production of the U.S. issue to the National Commission of Fine Arts; latter selected James Earle Fraser, New York, to execute the design. Sculptor Fraser worked with Medallic Art Co. in the preparation of models, reductions, and hubs. Medals were struck in bronze, of 90% copper and 10% zinc, at Art Metal Works, Newark, NJ, from dies made at the U.S. Mint, about 100 sets of dies being required. Medals were awarded to all members of the armed forces who served between April 6, 1917 and Nov. 11, 1918--approximately 4,765,000 men. 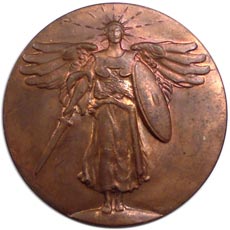 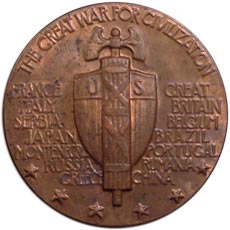 Obv. Winged Victory, standing, sword in r. hand, buckler on l. arm, microscopic Fraser above r. side of base.
Rev. In center, vertical shield, upon which is a fasces; U to l. and S to r. of fasces, on upper part of shield; in field to l. of shield, France / Italy / Serbia / Japan / Montenegro / Russia / Greece; to r., Great / Britain / Belgium / Brazil / Portugal / Rumania / China; above all, The Great War for Civilization; below all, around, six stars. 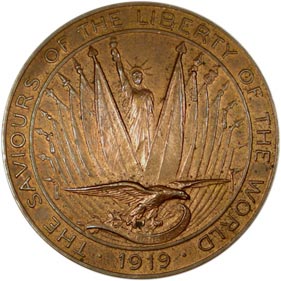 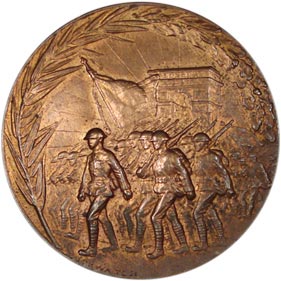 Obv. Within circle, Statue of Liberty, facing, between flags of Allies, eight on l., seven on r.; eagle below, seated on streamer bearing E Pluribus Unum; legend around, • The Saviours of the Liberty of the World • 1919
Rev. American soldiers march past Arc de Triomphe; in border before and above them, olive and laurel branches; in minute incused letters, on rim to l. of stem Rene Robert; incused, near bottom edge. Outhwaite Sc