Site, Dates: First observance March 4, 1891 (exact anniversary) limited largely to that by legislature in Montpelier. Combined centennial ceremony and monument dedication held at Bennington, Aug. 19, 1891, in presence of "many thousands." 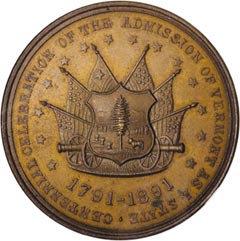 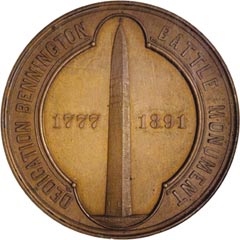 Obv. In center is design of shield, draped around by 6 flags over cannon at l. and at r.; around design are 14 stars; below design 1791-1891; border legend Centennial celebration of the admission of Vermont as a state.
Rev. In center is counter-sunk area containing tall monument with 1777 to l. and 1891 to r.; on main surface, to l. around Dedication Bennington; on main surface, to r. around Battle monument

Struck by Philadelphia medalist William H. Warner, who was also the brother of Col. Seth Warner. 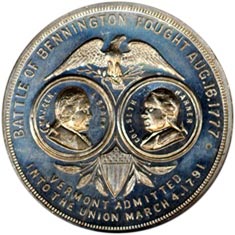 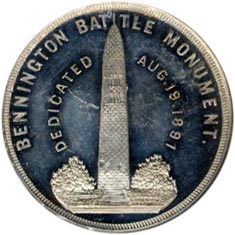