Purpose: To commemorate 150th anniversary of Declaration of Independence.

Participants: President Coolidge extended broad foreign invitation "for the purpose of exhibiting the progress of United States and other nations in art, science and industry, trade and commerce...". Sixteen states and 43 foreign countries represented, 7 of each erecting own buildings. Federal displays included Mint Exhibit. 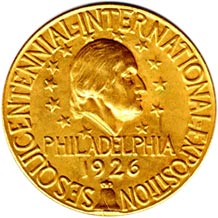 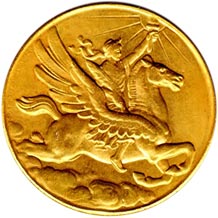 NOTE: Bronze piece struck on different dies from others and in higher relief, both obverse and reverse.

Issued by State of Connecticut both to commemorate 150th anniversary of death of Nathan Hale, her patriot-martyr son, shot as spy in 1776 and for dedication of Connecticut Building on exposition grounds. Medal designed by George S. Godard; 6 Gold, 25 Silver and 5,000 Bronze pieces struck by Whitehead & Hoag Co.; Gold specimens presented to heads of governments, considered uncollectible. Silver medals presented to important guests; Bronze medals sold at Connecticut Building on exposition grounds and at State Library, Hartford, for 50 cents, or 75 cents if mailed. 250 bronze pieces were remaining in 1980, and offered for sale by the State Library at that time for $8, or $9 if mailed. 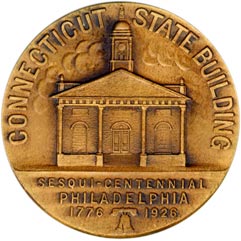 Obv. Edifice; below, Sesqui-Centennial / Philadelphia / 1776 (Liberty Bell) 1926; above, around Connecticut State Building.
Rev. Statue to l., with laurel branch below; State Seal in upper r.; below seal, "I Only Regret That I Have / But One Life to Lose for / My Country" / Nathan Hale / Patriot-Martyr / Connecticut / 1755 / 1776; at l. rim, microscopic Whitehead-Hoag 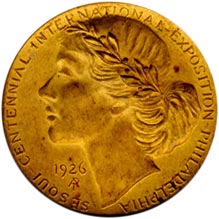 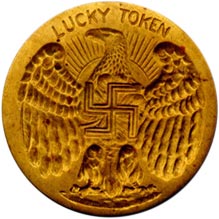 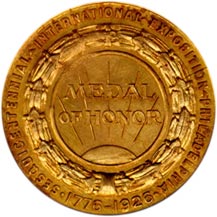 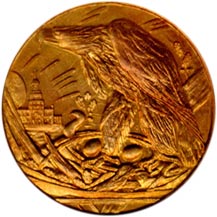 Obv. Within center wreath Medal / of Honor; outside around, Sesquicentennial-International-Exposition-Philadelphia; below, • 1776-1926 •
Rev. Large eagle, facing to l., stands in nest; edifice in field near l. border.