Purpose: "To display the products, manufactures and industries of the states and territories west of the Mississippi River."

Organization: World's Columbian Exposition 1893 was revelation to the people of the nation" and "inspiration to leading men elsewhere to think of similar enterprises." Trans-Mississippi Congress, composed of representatives of western states, met annually; their Convention November, 1895, at Omaha selected that city as site; exposition company organized January, 1896. Financial panic of 1893 and droughts of 1894 and 1895 developed opposition and difficulties. However, funds raised by public subscription; state and county granted $100,000 each; Congress $250,000. After exposition closed, stockholders recovered 90% of "face value of stock," an unprecedented financial result.

Site: On "plateau of ground," about 184 acres, in northeast section of city; now built over except for small park, Kountze Park.

Participants: When Spanish-American War broke out April, 1898, all national publicity was directed there. Confronted with both War and "stupor of discouragement and depression" pervading "all business and all peoples," many prospective exhibitors cancelled space. However, 40 states and territories (9 erected own buildings) and 10 foreign countries represented. "Separate" exhibitors exceeded 5,000; many Federal displays included Mint Exhibit.

Comment: All buildings were "of simple classic (Ionic) design, influenced by French Renaissance styling" without excess ornamentation, of ivory white and with uniform gray-green roofs. First "bold" use of incandescent bulbs as against arc lights of previous expositions. Mining exhibits, including process of extracting precious metals from ore, were "outstanding"; gold exhibit was "phenomenal," that from Alaska one containing specimen of every camp there.

Medals: Official Medals struck in Mint Exhibit from dies made at Philadelphia Mint. Obverse is composite picture "of...the most beautiful women in the Trans-Mississippi country" while reverse was designed by T. R. Kimball, Omaha, Architect in Chief of exposition. About "25,000 of these coins were sold". 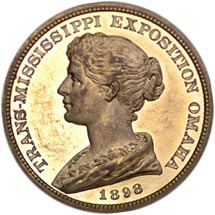 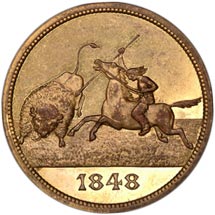 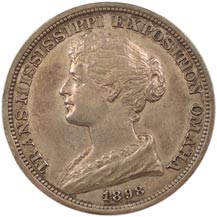 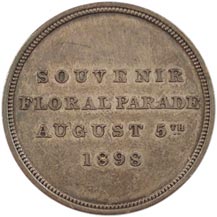 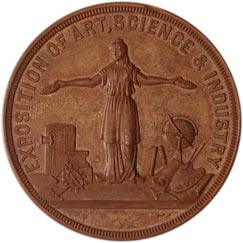 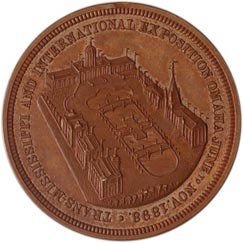