Many of these issues were of official nature; struck and sold to assist in defraying cost of particular celebration or memorial involved. While thus localized sometimes as to issue, original events obviously were of great national importance. 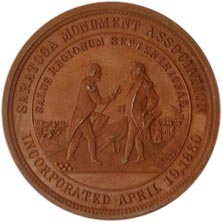 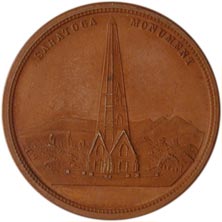 A leaflet distributed with some of the medals contains a copy of notarized statements from Harrison Wright, chairman of the Committee on the Wyoming Memorial Medal and from George Morgan attesting to the mintage figures shown below. The statement from Morgan confirms that "he designed the Wyoming Memorial Medal, cut the dies and furnished the committee with the medals," and that "the dies from which the above medals were struck, have this day [July 15, 1878] been broken...and the fragments forwaded to the committee." A note in 13 AJN 48 reports that the 7 pieces in gold were struck for presentation to Mrs. Hayes (the President's wife) and others, although the official record of the event states that they were intended to be "awarded as prizes in regattas, or for the best displays of civic or military associations." 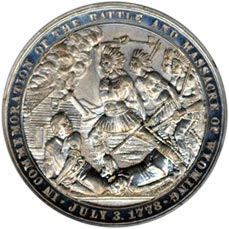 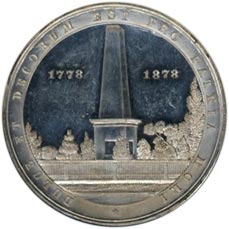 Obv. Scene depicting massacre by Indians--within center circle; outside, around. In commemoration of the battle and massacre of Wyoming. July 3. 1778.
Rev. Monument, to l. 1778, to r. 1878, inside fenced grounds--all within center circle; outside, around Dulce et decorum est pro patria mori * (translation: "It is a sweet and noble thing to die for one's country," paraphrased from Horace Odes book iii, ode 2) 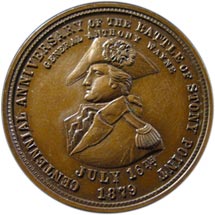 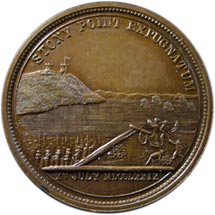 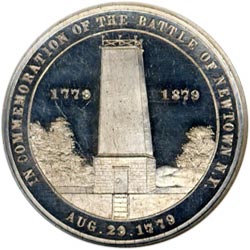 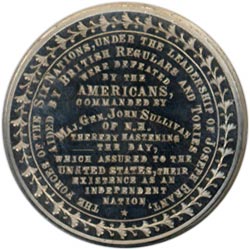 Obv. Tower and grounds, to l. 1779, to r. 1879-- all within center circle; outside, around In commemoration of the battle of Newtown N. Y.; below Aug 29. 1779.
Rev. Wreath around border, within circle within wreath and around in two lines * The forces of the Six Nations, under the leadership of Joseph Brant / aided by British regulars and Tories, across were defeated / by the / Americans / commanded by / Maj. Gen. John Sullivan / of N. H. / thereby hastening / the day / which assured to the / United States, their / existence as an independent / nation 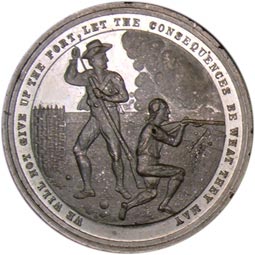 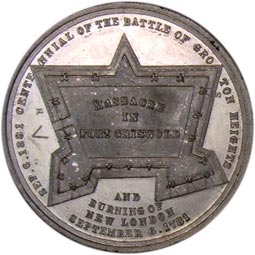 Obv. Within low walls of Fort are American soldier reloading musket and kneeling Indian aiming gun over wall--all in center circle; outside, around We will not give up the fort, let the consequences be what they may
Rev. Outline of Fort; within outline Massacre / in / Fort Griswold; outside, to l. of Fort is directional arrow pointing N; below Fort and / Burning of / New London / September 6. 1781; around border Sep. 6. 1881 Centennial of the Battle of Groton Heights 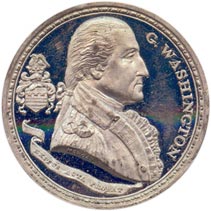 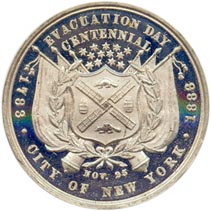 Obv. Military bust, facing to r., below r. shoulder microscopic Morgan [George T. Morgan, engraver]; to l., coat of arms; to r., around, G. Washington; on ribbon below bust, Exitus acta probat; beaded border.
Rev. Seal: Three flags to l. and 3 to r. of shield, about which is open wreath, tied at bottom; 13 stars above shield, 2 cannon below; above all, around, Evacuation Day / Centennial; below, around, Nov. 25 / 1783. City of New York. 1883 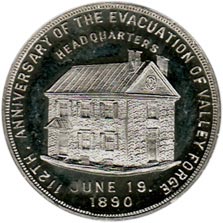 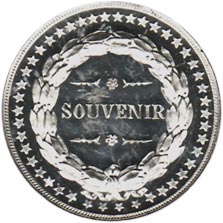 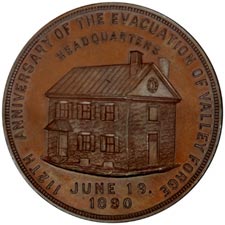 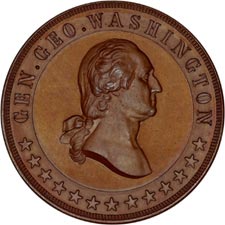 Obv. Same as obverse of No. 126 [Valley Forge Headquarters].
Rev. Naked bust r., within sunken circle; above, around Gen. Geo. Washington; below, around thirteen stars. 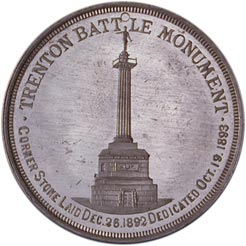 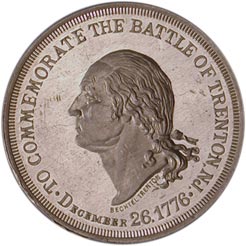 While evacuation of Ft. Shelby by British did not occur during Revolutionary War, it was direct result of and sequel to it; hence this listing. 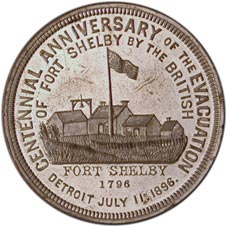 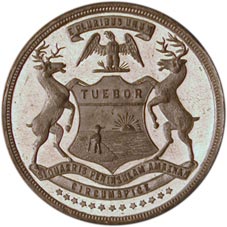 Obv. Group of buildings with flag flying from tall pole in center; above, around Centennial anniversary of the evacuation / of Fort Shelby by the British; below buildings Fort Shelby / 1796 / Detroit July 11, 1896; beaded border.
Rev. State Seal; below are 13 stars around; beaded border.

Reverse of issue below is replica of famous Gold medal given General Washington by Resolution of Continental Congress March 25, 1776; only gold medal ever granted him by Federal Government. One hundred years later, just prior to both Centennial Celebration of Evacuation, Boston and to U.S. Centennial, Philadelphia--1876, 50 Boston citizens subscribed fund to purchase medal from Washington family who finally were induced to act due both "to losses sustained...during... Civil War...and (national) interest...of the centennial."

Purchasers immediately presented piece to City of Boston to be "preserved forever in the Boston Public Library." Medal is about 68mm. in size, 2 11/16mm. thick and weighs more than 7 oz.

These reproductions were distributed to Boston school children in 1901; struck by Whitehead & Hoag, Newark, NJ. 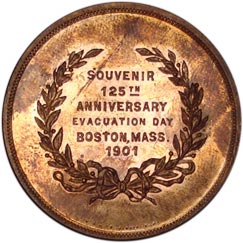 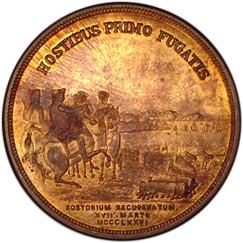 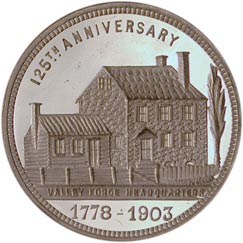 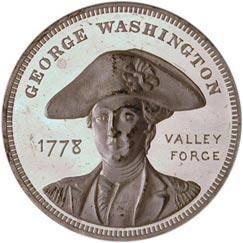 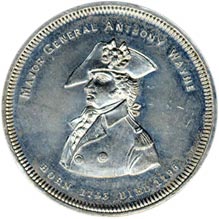 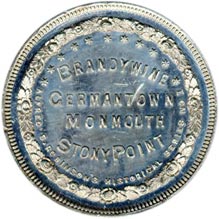 Obv. Military bust facing part l.; above, around Major General Anthony Wayne; below bust born 1745 died 1796; beaded border.
Rev. Across Brandywine / Germantown / Monmouth / Stony Point; above all 11 stars around; below, around, small Alfred S. Robinson's historical series No. 1-- all within closed wreath which is around and close to entire border; beaded border. 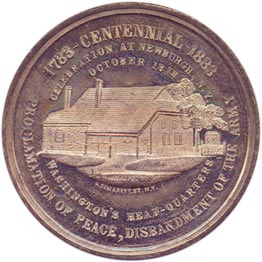 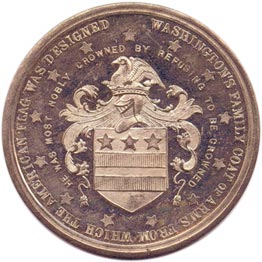 Obv. Edifice in center; above, around Celebration at Newburgh, N. Y. / October 18th; below edifice, microscopic A. Demarest, Sc. N. Y.; upper border legend 1783 -- Centennial -- 1883; lower border legend Proclamation of peace, disbandment of the army
Rev. Coat of Arms in center; around He was most nobly crowned by refusing to be crowned; 13 stars around last lettering; border legend Washington's family coat of arms from which the American flag was designed

Medal commemorates 100th anniversary of departure of Continental Army from Valley Forge June 19, 1778. Authorized by 45th Congress, designed and engraved by William Barber, it was struck originally in 1880 at Philadelphia Mint; became one of Mint Medal Series (Miscellaneous No. 4). 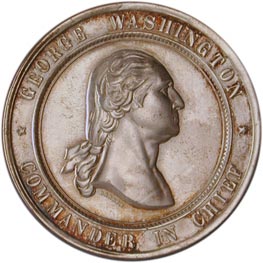 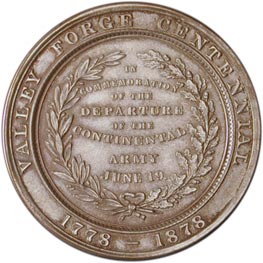