Pedley-Ryan & Co., Denver investment house, in order to provide a convenient medium for speculation in silver and to increase the use and popularity of silver as a medium of exchange, started a "Buy-an-Ounce-of-Silver" campaign Jan. 5, 1933. Silver at that time was in very limited demand, bar silver being quoted at 27 cents an ounce. Up to that time, the minimum amount of silver traded in on the big markets for actual delivery was 25,000 ounces, and this amount had been sold only since summer 1932.

On Jan. 5, Pedley-Ryan began its sale of round, rimless, plain-edge discs. Size of a standard U.S. dollar, they contained one ounce of silver, 430 grains 99% fine. The slugs were sold three for a dollar and Pedley-Ryan was to redeem them at prevailing market prices of silver. It was believed that thousands of investors throughout the country would purchase the "dollars" and would realize large profits when silver reached the 16 to 1 ratio hoped for by the silver bloc. Silver mining interests in Colorado and elsewhere would, in the meantime, benefit from an increased market for silver.

The campaign, which enabled even the smallest investor to speculate, ended in late summer. Sales had not reached anticipated goals. After that, Pedley-Ryan (later known as the Cow Gulch Oil Co.) sold bars of 1,000 ounces only.

Planchets for the pieces were made for Pedley-Ryan by the Sachs-Lawlor Co., Denver, the silver being obtained from the Denver Mint in 100-plus ounce bars. The discs were stamped by a girl in the Pedley-Ryan office. All have plain edge. First five types sold by Pedley-Ryan were stamped or punched (incuse) while Type VII was embossed. Types V and VI, incuse, are not listed in Kenney.

In An Inside View of the Coin Hobby in the 1930s: The Walter P. Nichols File, Q. David Bowers reproduces a series of postcards to Nichols from Ernest Cerny of Denver in March and April, 1933. Cerny describes Nos. 822 and 824 as difficult to find, but available for sale at $2.50 and $2.00 respectively. No. 825 is described as common, available at 3 for $1.25. He implies that those were the only three types he knew had been produced. Cerny states that 87 pieces were stuck of No. 824, a figure that is slightly different from the 85 mintage listed below. Since Cerny does not mention No. 823 at all, it is possible that his mintage figure includes specimens of both Nos. 823 and 824. 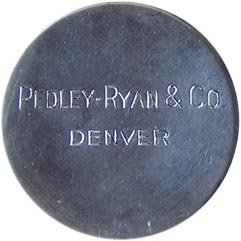 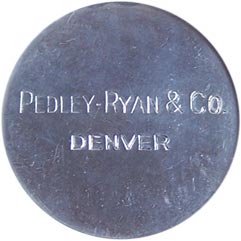 Only 15 issued, all on Jan. 6, 1933. This variety was withdrawn when it was discovered that an error, 90% instead of 99% Fine, had been made. The word Fine was chiseled out and the altered die was used to strike additional pieces (Type III) for the silver movement boosters present at the striking. 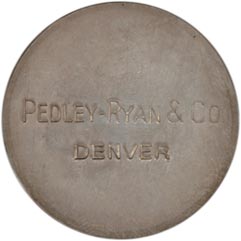 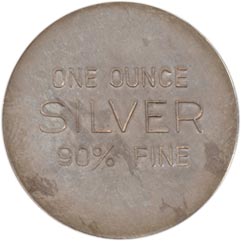 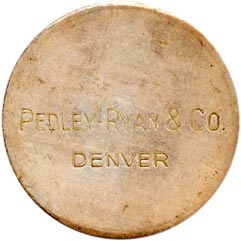 Not more than 500 issued, beginning Jan. 7, 1933. Pedley-Ryan expressed hope this would be "the last and final variety." Complaints developed, however, that some motorists were using the slugs in lieu of silver dollars at automatic filling stations. A further change then was made, both as to size and type (Type VII). It was reported previously that only "50 made" of this Type IV; obviously an error. 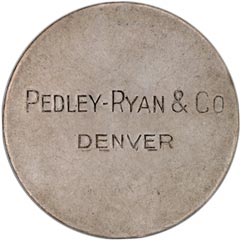 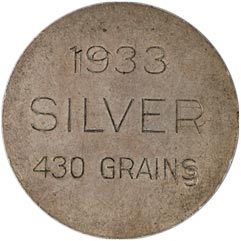 This is the same as Type IV except that word Denver was omitted on obverse. Apparently obverse die was cut incorrectly and error was discovered after only a few Type V were struck. 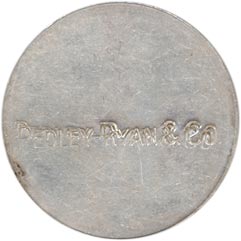 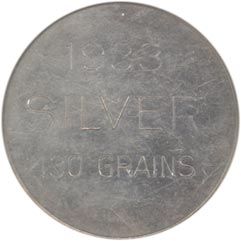 Bertram Robbins and his son Bertram Robbins, Jr., operators of a men's clothing store in Colorado Springs, bought 300 discs (Type IV) from Pedley-Ryan & Co. in Denver at bullion value. One Saturday morning in 1933, Bertram, Jr., seated in a store display window, used a punch-type die to make an impression Robbins on the Corner above Pedley-Ryan & Co. (In a few instances, the impression was made below Pedley-Ryan & Co.) With each purchase in the store, a customer could buy one of the discs for $1. All 300 pieces were sold that day. Kappen-Mitchell, Depression Scrip of the United States, Colo. No. 5. 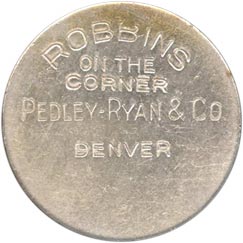 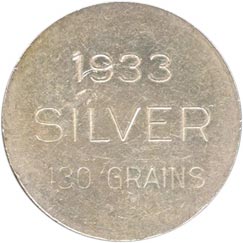 This is the only embossed Pedley-Ryan; only 50 issued, beginning in June 1933. 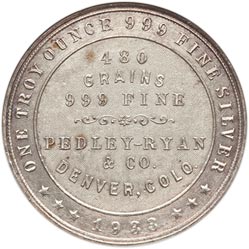 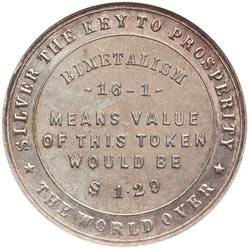