A variety of privately struck medals were issued to commemorate Hawaii's admission to Statehood, August 21, 1959, but only a limited number qualify for listing here.

Discovered by Captain James Cook in 1778 who named it Sandwich Islands, Hawaii is 390 mile chain of 20 islands, 8 inhabited, with total area of 6,000 square miles. Native monarchs ruled until 1893 when republic was established which asked annexation by United States. Congress finally acted July 7, 1898; followed by establishment as Territory June 14, 1900. 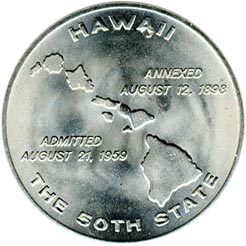 Obv. Male figure, between crossed flags, robed as a native chief with spear in l. hand, r. hand outstretched; above Hawaii / The Aloha State; below flags In God We Trust; below, around 50 Star Flag Official July 4, 1960
Rev. Hawaiian Island chain across from upper l. to lower r.; at top Hawaii; to upper r. of islands Annexed / August 12, 1898; to lower l. of islands Admitted / August 21, 1959; below, around The 50th State

Issue consisted of 725 Nickel-silver and 10,000 "Richelieu" Brass; sold for $2.25 and $1 respectively. In addition, 12 Gold (10K) and 8 Aluminum medals were struck but not placed on public sale. Gold specimens were used for presentation purposes while Aluminum actually were trial pieces. Originally it was planned to strike 10,000 in latter metal but final decision was for Brass. 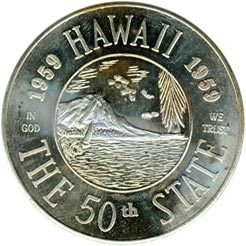 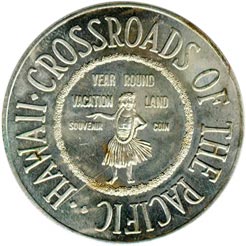 Obv. Diamond Head and Waikiki Surf in center circle; outside, above 1959 Hawaii 1959; l. side In / God, r. side We / Trust; below The 50th State
Rev. In center circle resembling circular lei is a Hula Girl; above, within same circle, Year Round / Vacation Land; to l. of girl Souvenir, to r. Coin; outside circle, around • Hawaii • Crossroads of the Pacific •