Struck copies of many early American coins were popular in the middle and late 19th Century, concurrent with a quickening of interest during that period in everything numismatic. Foremost among engravers and/or issuers of these copies were Thomas Wyatt, Alfred S. Robinson, William Idler, John Adams Bolen, Prof. Montroville Wilson Dickeson, C. Wyllys Betts and, later on, Thomas L. Elder.

Professor Dickeson (1813-1882) was a medical doctor, but the study of antiquities and archeology occupied most of his years. A numismatist of note, he published the American Numismatic Manual of 1859. Struck copies of the Continental Dollar were made by him as souvenirs for the U.S. Centennial Exposition of 1876. Years later, Elder acquired one or both dies.

Dies for the original Continental Dollar were cut by Elisha Gallaudet, New York engraver, in 1776. (E.G. FECIT on some of these originals means Elisha Gallaudet Made It.) Continental Currency coinage designs are patterned after the Fugio vignette on obverse and chain of states on reverse of the fractional notes of Feb. 17, 1776, said to have been designed by Benjamin Franklin. The motto, "Mind Your Business," sometimes attributed to Franklin, actually was a rephrasing by him of the earlier English motto, "Begone About Your Business," or "Be About Your Business." The chain of links symbolizes the unity of the 13 original states. 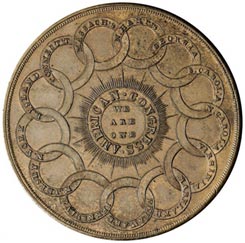 Obv. Within circle, sun dial, sun rays to upper left; below, Mind Your / Business; within this circle and an outer one, Fugio to l and the sun; outside, around, Continental Currency; below, 1776; beaded border.
Rev. We / are / One within small center circle; between this and second circle, American • Congress •; rays; outside, around, a chain of circles, on each the name of one of the 13 original states; beaded border.

NOTE: In 1962, 7,200 White Metal restrikes were issued by the current owners of the dies, Empire Coin Company, owned by Q. David Bowers. The medals were minted by John Pinches & Sons, Ltd., of England. Empire Coin die varieties can be attributed by a small die gouge above the O of Continental in the denticles and a diagonal scratch below the C in Continental. Empire Coin Company then sold the dies to Robert Bashlow, who produced 2,000 Silver, 3,000 Goldine and 5,000 Bronze restrikes, together with "a few trial pieces in various metals." He later announced that "dies have already been donated to the Smithsonian Institution..." Thickness of these White Metal restrikes is approximately 2 1/2 mm. as compared with 3 mm. thickness of Dickeson piece, No. 854. Silver restrikes by Bashlow have small S on reverse and are approximately 2 3/4 mm. in thickness (no S on No. 852); Goldine and Bronze restrikes are approximately 2 1/2 mm. thick.