While visiting in Europe, Dana Bickford of New York City experienced the usual difficulty of travelers in getting money of one country exchanged for that of another. Upon his return, he submitted several designs for a proposed international coinage to Dr. Henry R. Linderman, then Mint Director, who approved the idea because of the saving an international coinage would afford the U.S. Government, as well as the convenience it would provide travelers abroad. Recoinage and waste on coin coming into this country amounted to approximately one-half million dollars a year at that time.

Using one of Bickford's designs, Dr. Linderman in 1874 had a pattern eagle struck in gold, copper, nickel and aluminum. This pattern is not bi-metallic, but like the later private issues, it bears on reverse coin equivalents of several countries. Congress failed to take action to approve the idea, and the project was dropped.

Bickford, in 1897, issued eight "dollars" or patterns for an international coinage, reverse inscription on each giving exchange value of the dollar in several world currencies, all 28mm. 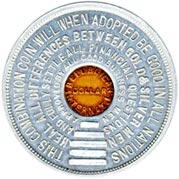 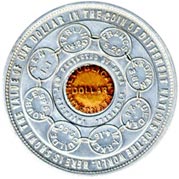 Obv. Within circular center, Dollar in straight line, Republican in curved line above and Internat.l., curved, below; from circular center to border, five dashes, representing silver bars; beginning in outer border, four lines, making almost complete circles, This Combination Coin Will When Adopted be Good in All Nations / Heal All Differences Between Gold & Silver Men / and Fully Settle All Financial Questions / Approved by All Good Business Men; beaded border.
Rev. Same center inscription; between outer circle and beaded border, Here is Shown the Value of Our Dollar in the Coin of Different Nations of the World.; between outer and inner circles, eight links contain Sterling 4.2 Francs 5.20 Kronen 3.80 Gulden 2.8 Marken 4.16 Guilder 2.50 Rouble 9.65 Yen 1.1; between inner circle and center, Invented and Protected by Dana Bickford. 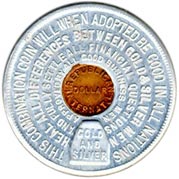 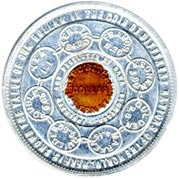 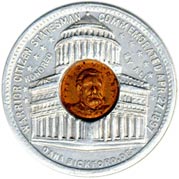